For a century we have seen the unfettered rise in taxes levied on incomes.  Taxes are “always” temporary and applied only to “bad things” or “bad people” or so the voters believe.  This belief continues unabated even when good things and good people wind up paying the tax.

Disbelief is often suspended even when the amount of the tax, the rate of the tax, the things that are taxed all increase, and griping begins only when the time required to pay the tax after filling in the form(s) takes more than 3 minutes total.

Today 1040s and the associated schedules filed with Federal income tax reporting consumes an average of 9 work-hours to complete.  Billions of work-hours are spent each year on gathering information, like 1099s, W-2s, and receipts of all types, to be used in completing the annual exercise, installing software or using web-based commercial services to compute the tax after submitting all the gathered information.  We also spend an enormous amount of time trying to interpret whether a rule applies to us, what a definition means, and what additional information is needed to follow the complicated rules.

Income tax preparation software also sets us back some dough that we could use for our enjoyment.  If we had a clue how to calculate the deductibility of a particular expense, we could have saved almost 20 minutes looking it up on-line or trying to read the IRS publication about it, after we searched through 4 other publications that might have the thing we’re wondering about.  It dawns on all of us at some point, that the whole thing is a giant exercise in waste.

Is all this waste of time and money and effort that could be applied to something useful what Americans really want?

No, it’s not a good use of time and effort, and it’s counter-productive.  Taxing incomes basically punishes success.  A graduated tax rate (often called progressive) is actually worse than just punishment.  Taxpayers will attempt to redefine some types of income as others or delay or advance income events to correspond to taxing periods, not economic milestones.

Federal versus State and Local Determination of Taxation

Do we really want a 1-on-1 relationship with the Federal government?  Federal income tax is an attempt to bypass the states as the primary governance with individuals.  The Founding Fathers envisioned the Federal government budgeting and presenting an invoice to each state, based on its population, for the the state’s share of the national budget.  The state, then would decide how that bill would be paid.

The IRS circumvents this thinking by taking the money directly from individuals and businesses, regardless of whether they conduct affairs across state lines or not.  Besides the enormous waste of time for individuals and expense of accounting/tax preparation software the income tax violates the principle of state’s paying its share and worse, it creates a direct link to individual citizens of each state to monitor them. 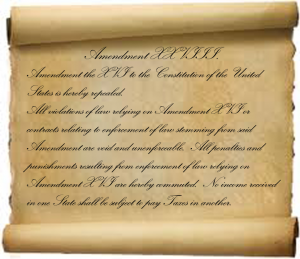 Taxes are punishment – so what do we want to punish?  Success, failure, or mere existence?  Maybe we want to punish consumption and reward saving or investment.  After all, if someone saves for the future, there is less risk they’ll be dependent on the rest of us.

If everybody consumes less, we’ll all have a smaller carbon footprint, won’t we?

But some consumption is of renewable items or from recycled leftovers of previous consumption.  It doesn’t make sense to tax, for example, electrical energy produced from solar power.  Neither does taxing food, at all, unless the food consumed can never be re-grown or renewed.  Labor is also clearly renewable.  Labor should never be taxed as consumption.

Plastic may be recyclable, but it took millions of years to produce the crude oil that plastic is originally manufactured from.  So, the original act of producing plastic may be a good thing to tax as consumption, because the renewal period is so long.  Wood, on the other hand, is renewable within a couple of decades, except of course for majestic trees like redwoods.

Tax All Consumption or Just a Some Things

But, should we punish the necessaries of life?  Consumption of bottled water might be something we should cut back on, and what about red meat or cigarettes or gasoline?

Who gets to decide what should be taxed more than other things, just because they’re not the essentials?  Maybe all food should be tax-free (as if obesity weren’t already a big problem).  If everything we consume simply cost more, then maybe we’d prioritize spending on consumables better.  Taxing consumption would certainly discourage it.

Bottled Water and Mixed Use Consumption

Taxing bottles of water might best be reined in by making the water tax-free but the bottle itself taxable with the tax determined by whether the whole container is recycled, recyclable, or brand new.  So, some consumption should be tax-free and some taxable, but many activities are both at the same time.

By consuming a non-recycled or non-recyclable bottle did someone lose a job?  Did the oil the plastic came from simply disappear – never to be recycled or re-used again?  What actual harm was done by consuming oil for production of a plastic bottle?  We might also ask what harm is done by depleting oil to be refined and used in transporting us around in gasoline-powered cars?  Climate change acolytes could claim it will raise the temperature of the Earth.  But really by consuming we’re choosing not to save for later consumption.

If using money is a choice between saving and consuming, maybe the mere act of consuming means a person is not saving.  Savings allow a person to weather rainy financial times, to have something to draw on in case of unemployment, to invest in one’s own future, like education or even durable physical things, or to use when one turns old and gray or sick.  So, these things are normally provided for by our setting aside savings and are legitimate possible uses for savings.  We should promote, not tax, saving.

Saving for retirement clearly should never be taxed.  What about gains in the savings due to appreciation or increase in value?  Since no consumption was involved, NO.  Taxing capital gains is ridiculous.  The loss in value of an investment due to inflation is never considered, distorting the market by taxing government-induced inflation of asset values.

The Golden Rule and Retirement

You buy a bar of gold for $100 and the government debases the money supply, making the gold bar price rise to $1,000.  If you convert it back into the debased money, the IRS wants to tax the “gain” in value of $900.  This is just wrong.

Perhaps instead of 15.3% FICA we should have a 15.3% consumption tax allocated to Social Security-type programs.  Or perhaps unemployment re-training and the like.  What government uses the collected tax for is the key factor.  Taking money from us just because they can is immoral and counter-productive.

Ending the taxation of incomes, no matter how defined, is extremely important.  To that purpose the 28th Amendment is proposed.