The purpose of Congressional oversight is to verify that laws passed by Congress are being adhered to, being properly enforced, and whether any improvements to the legislation are needed.  Note that this power is not specifically called out in the Constitution, although it should be.

The Supreme Court has ruled that Congress has this power, because the power to legislate includes the power to verify that legislation is actually implemented as intended by the Executive.  It may be necessary to clarify the extent of this power and how it consummated.

Complaints of Executive over-reach are really about the President or his administration twisting the intent or express provisions of law to do something other than what the law calls for.  Regulations that implement a law are these days written by the Executive branch and then read into the Federal Register to publish them.

Of course, the President has the power to issue orders that clarify laws passed by Congress.  Those Executive orders are not supposed to change the intention of a law, nor thwart the enforcement of law, because the President swears to uphold the laws of the United States and to defend the Constitution. 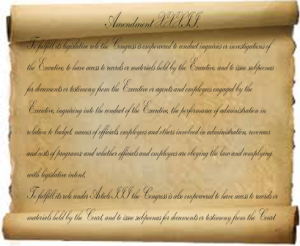 Administration staffers and lawyers also have the task to write up instructions for Federal officials, designing and publishing any needed forms for gathering information or recording data, and written regulations for filling those forms, processing them and storing them.  This regulatory authority is generally written into public laws.  Some states specify the exact content of regulations as part of law, not the agency appointed to enforce the law.

In addition to regulatory-drafting authority Federal agencies are also often authorized to conduct administrative hearings for those affected by the regulations.  These hearings are intended to supplement individual judgment calls by officials to prevent misapplication of the regulations or the law in processing, basically to assure fairness and justice.

The civil court on appeal is then faced with trying to judge the intention of the law but as implemented via the regulations.  The line between the words in the law and the provisions in the regulations often becomes blurred.  The court can side with the more detailed regulatory process as documented, or it can try to read between the lines of actual law to determine what was intended.

The Need to Clarify Oversight into the Constitution 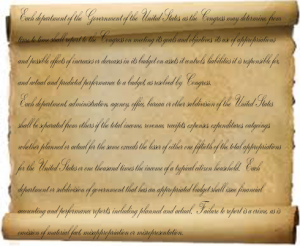 Oversight is hampered when Congress doesn’t have the power to subpoena witnesses and evidence.  Moreover, once subpoenaed witness need to be cooperative in order to get the testimony needed to evaluate the implementation of laws.

Constitutionally, an impeachment proceeding is not criminal, since the worst outcome of a successful impeachment hearing is removal from office.  Of course, criminal charges might also be pursued later.  But, if construction of oversight authorization limits outcome to the same as other impeachment proceedings and restricts the use of evidence gathered in Congressional oversight to at most impeachment, we may be able to compel appearance and to compel testimony under penalty of contempt of Congress. 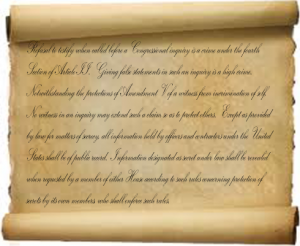 Provide standing for members of Congress and States to challenge executive actions before the Supreme Court or other such inferior court as Congress may designate.  While Amendment XXXII is somewhat lengthy, it does restore Constitutional checks of power against the Executive by the Legislative branch in