Ellis Island in New York opened in 1892 to house immigrant-applicants for long enough to vet them, before releasing them, typically into New York.  We don’t have an equivalent today, and we need one.

Normally, passengers arrived by ship in Manhattan and were ferried across to Ellis Island, about 13 miles away.  It closed in 1954 after some 12,000,000 immigrant hopefuls passed through there.  While Ellis is most notable for its role in immigration to America, serving as the main conduit, it also served as a prison, a Naval station, and a point of deportation, prior to its close.

Many points of entry into the US are used today.  The Tijuana entry point is especially well known after news reports showed Central American immigrants climbing on top of the wall that separates Mexico from the US.  Certainly millions of visitors come from all over the world by air mostly, but also by ship and some by foot along the southern border.

Each port of entry needs an international area, like all international airports have, to separate inbound items for Customs and to vet incoming passengers.  The areas must be large enough to house applicants who might arrive without sufficient documentation for immediate entry.  Cost will always be a factor, but it should be borne mainly by those who show up without prior authorization and to a lesser extent by others, including importers and exporters.

Temporary housing for applicants to immigrate is sorely needed in some places.  Tijuana is a good example.  Immigrants were subject to physical and mental exams to ensure they were fit for admittance to the United States at Ellis Island.  This is difficult to do at the San Ysidro crossing.  Some 90,000 or more entries occur every single day – that’s 70,000 vehicles plus 20,000 pedestrians.

Fortunately, only a small fraction of those entries necessitate holding the entrant for further checking.  But where would you put 10,000 people, if you had to?

Ellis boasted a 98% admission rate, typically completed in 3-5 hours, but occasionally stretching into weeks for those without sufficient paperwork.  You can read more of the history of Ellis here.

Santa Catalina Island is well known for its beauty and nature’s setting.  It is somewhat developed and easily accessible from San Diego or even Los Angeles.

San Clemente Island is a military reservation, like Ellis once was, located a short distance from Catalina.  There isn’t a whole lot on the island some 40 miles from San Diego, except the Naval facilities. 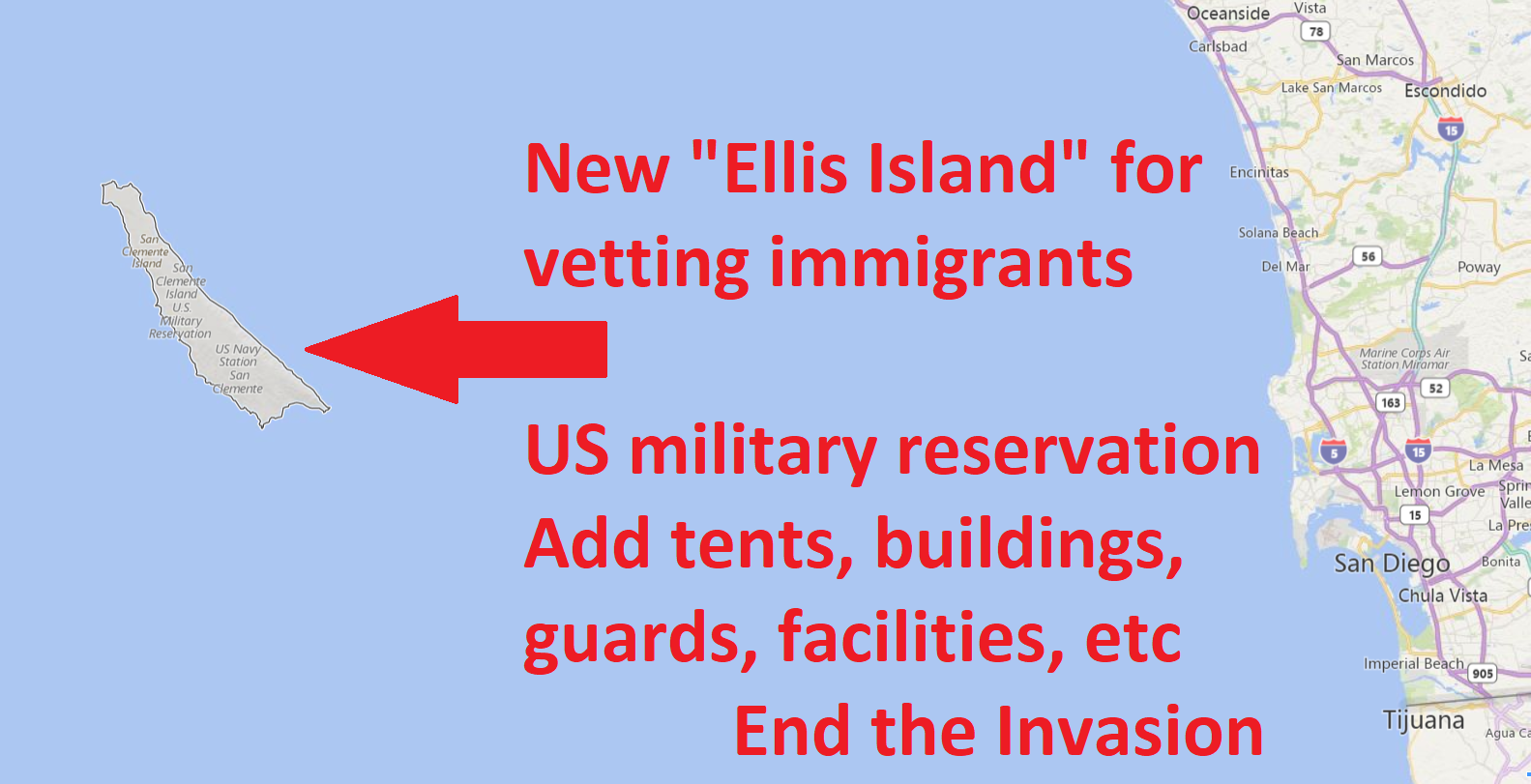 What would it take to put immigration facilities on San Clemente Island?  Several million dollars in development could result in adequate water, sanitation, and housing for thousands of applicants who need additional processing time.

The primary advantage of using islands is that they are isolated by water from mainland USA.  Easily reached by ferry, Clemente is a difficult place to swim from to get to San Diego or Los Angeles.  Clemente has the benefit of already being a Federal land and with little on it.  Making it into a new “Ellis Island” would just take some work.