Voting today is limited to only those voters residing within the jurisdictional boundaries of the election.  Typically, the geographic limitations are imposed by requiring citizens to prove residence in a jurisdiction before allowing them to vote.  Residence implies that those voting have a vested interest in the outcome because they have to live with those results and pay the taxes that are used to fund the governance in the jurisdiction.  If a citizen pays taxes, they should have a right to say how those taxes are spent.  In 1776 we fought for the principle “No Taxation without Representation.”

If a foreigner visits NYC and pays sales tax on items he buys there, should he get a voter card there?  If he is only visiting, he probably does not have more than a passing interest in who’s mayor or whether a sewer project is voted and funded by taxes and fees.

However, if the NJ citizen who commutes in every workday has to pay taxes on his paycheck he earns in NYC, he probably wants to have a say in whether tunnel fees rise or a stadium is paid for by his taxes.  That’s only fair.

The same is true of a citizen who owns a second home, a dwelling he rents to others or property he simply pays real estate taxes on.  He should have the right to say how those taxes are spent.  While we’re sympathetic to the citizen who crosses a state line to buy goods that are cheaper or not available where he lives, we don’t think he should get a voter card for that situation, even though he pays sales tax.

But why does the apartment-dwelling suburban homeowner have to choose between voting in the city or voting in the suburbs?  Why does the real estate investor have no say over how his taxes are spent that are collected on his rental property?  By requiring residence in the property even though real estate taxes are paid the government has disenfranchised the investor and second home owner.

A citizen should have the right to vote in every jurisdiction where he lives and/or pays taxes.

We need a Constitutional Amendment to assure this.

We do need to limit this proposal with the notion we also adhere to “One Man, One Vote.”  For example, suppose the suburban family owns a house in CT and a working parent of the family also owns an apartment in the city (NYC).  Should the apartment dweller be able to vote in both NYC and suburban CT?

Yes, but she or he gets only one vote in each distinct jurisdiction.  So, in each city he or she gets a vote and in each state, but not 2 votes for President, since that violates the One-Man One-Vote principle.  The voter must decide which is the principal residence and vote for President in that precinct only.

When a voter is eligible to vote in more than one precinct because of her taxpayer or residence status, then any overlapping jurisdictions between the precincts have to be resolved to a single vote.  If an investor owns 10 houses in 5 cities with 3 school districts, then she’ll get 5 city votes and 3 school board votes.

One does wonder, though, after due consideration, if “No Taxation without Representation” is a sound principle, is the converse also valid.  If you pay no taxes, should you be able to vote to raise taxes on other citizens? 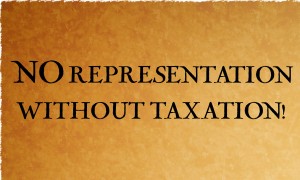 This parapraxis actually captures the concept described above.  But since it generally disenfranchises people if they pay no taxes, we need to word any Constitutional limitation to cover the case where non-taxpayers are prohibited from setting tax rates or taxes for taxpayers.  This might also include officials responsible for setting taxes and tax rates.  If a person isn’t currently paying a particular tax, that person should not be able to increase taxes on those who are paying.