…on the basis or race, color, creed or national origin…

What is the difference among these “prohibited” bases and religion for discrimination?

Race, Color (skin color) and National origin are rather obvious in their meaning, but what about Creed and Religion?

“Beliefs” are hypotheses that are:

but they are things that an individual holds to be true. These beliefs may coincide with the beliefs of others, or they may be completely at odds with others’, or they may be matters that others hold no opinion in conflict and so feel neutral about or ignore.

Obviously, beliefs are part of any religion.  But believing in something doesn’t make a person religious.

A group may subscribe to a set of beliefs without believing in the creation by or control of a superior being, such as a god. This set of beliefs is often described as the “creed” of the group.

A religion has a creed but also some beliefs concerning the creation of the universe or its control.  Religions all have creeds plus a belief in God or gods. 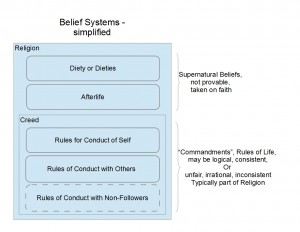 Obviously, creeds are also part of any religion.  They are, however, separate and distinct from beliefs about a supreme being or beings and beliefs in an afterlife.

While a creed can be a part of a religion, it is not necessarily the whole of it.

Should our laws prohibit religions?

Beliefs that do not revolve around a deity and require no action that conflicts with law are not a valid area to enact prohibitive legislation. The principle of tolerance is a good basis for all religions to be treated equally so long as the portion of the religion’s creed not dealing with actionable beliefs is benign, and the portion requiring or advocating actions would violate no law.

For example, if a creed or religion demanded that all children upon reaching age 9 be sexually assaulted by a neighbor, we would be justified in prohibiting the practice of that belief, since it so contravenes our sense of the moral and lawful way to bring up children.  By extension we can categorically state that any belief that violates the law should be proscribed and followers of the creed must swear to abrogate that portion of their creed or religion.

Oath to Place Law above Creed

President Franklin Roosevelt issued Executive Order 8802, reaffirming that as a matter of democratic principle that no one should be denied participation in the War Department.  From 1947 through 1949, Congress adopted a series of laws renaming and reorganizing the American national military establishment to a more politically correct set of nomenclature, including renaming the War Department as the Department of Defense.

This concept of non-denial on the basis of Race, Color, Creed, or National Origin has stuck in the vernacular of political correctness.  Some states, like Wisconsin, have expanded the list of protected classes to include “race, color, national origin, ancestry, creed, age, sex, disability, arrest or conviction record, marital status, sexual orientation, military status and use or non-use of lawful products away from work” in the name of egalitarianism.

On the face of it this state’s prohibition against considering any aspect of a person that might reasonably be used to indicate whether a potential employee could present a later threat, based on this lengthy list, might be short-sighted.  “Creed” (belief) that violating our laws is justified might be something we should check for, especially in employment and even admission into the United States.

One could also argue that an arrest record or conviction record might reasonably indicate a more than a fleeting possibility of repeating past transgressions.  But egalitarianism, the belief that none of us is any better than anyone else, and we’re all completely interchangeable, is a prime example of Belief Perseverance, a common affliction of Socialists.  Belief Perseverance occurs in the face of irrefutable evidence to the contrary and often precedes vociferous emotionally charged accusations of bias.

Joining any group from a volunteer group to a much larger society of a nation should involve more critical examination of beliefs than the cognitive bias demonstrated in FDR’s executive order 8802.  We pledge allegiance to the flag and swear to protect and defend the Constitution, but no one wants to inquire into the creed of foreigners applying to live among us, because to do so would deny the value of multi-culturalism and abridge the rights of Americans to practice their creed, no matter how diametrically opposed to the principles in the Declaration, and specifically to current law.

We should and do welcome anyone who adopts the American way of life.  Work Hard, Be Honest, Succeed – all solely on your own efforts.  It may be tempting to believe that no one is any different from anyone else, that “you didn’t build that” or all cultures are the same, but reality belies these beliefs.  The Socialist credo stands discredited and should be discarded.

If a foreigner wants to immigrate to live and work here, then he must want to adopt our culture, abandoning any creed that violates our laws or would reasonably engender an environment that destroys our culture of hard working, law-abiding, successful America.

There is nothing at all incompatible with American principles to ask and to verify of applicants for admission if they hold beliefs (whether they’re from a holy book they subscribe to or from the mouth of an ideologue) that are in opposition to American principles.  Some creeds believe it is acceptable to deceive other creeds about their true beliefs.  (So interviewers should belong to the same creed.)

If their creed advocates violence against others creeds, they don’t belong here.  If their creed celebrates the subjugation of a class of people, then they don’t belong here.  There can be no egalitarian society when one gender must follow behind the other, or when one religious group has to pay another group some special tax, or when martyrdom is more important than anything else, especially when it occurs in the act of murdering innocent people.